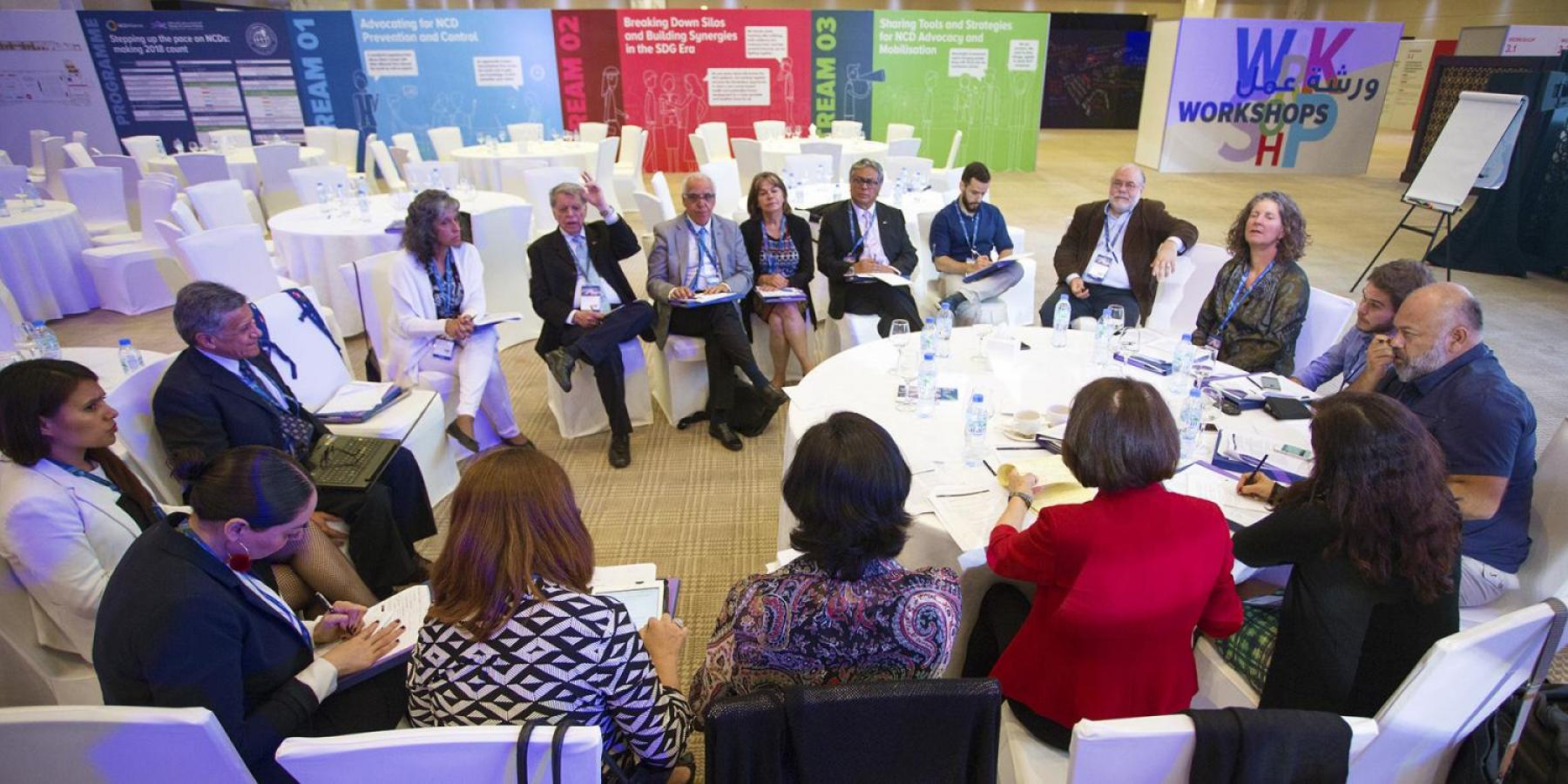 It’s exciting to be among the delegates participating in the 2nd Global NCD Alliance Forum in Sharjah, UAE, which kicked off on Saturday with advocates from 68 countries quickly jumping into discussions on the theme: Stepping up the pace on NCDs: making 2018 count.

The morning commenced with NCDA CEO Katie Dain welcoming delegates to a pre-forum advocacy planning session. The NCDA advocacy team’s Priya Kanayson & Alena Matzke then went into greater detail about the particularly important year ahead, with the third High-Level Meeting (HLM) on NCDs set to be held at the United Nations in New York – an opportunity to reinvigorate a process that began in 2011 at the first HLM. But, they emphasised, time is short: if, as hoped, the HLM is held in New York in September 2018, we have just nine months to go – and the Outcomes Document is likely to be finalised a couple of months prior to the meeting. This gives civil society a tight deadline for pulling together some powerful, challenging asks:

‘How do we coordinate and galvanise – from the community to national, regional and global levels?’

The NCDA advocacy team shared some background to the HLM, and an overview of what is anticipated over the coming 9 months, underlining the importance of collaborating as a global community around specific priorities to ensure real progress on NCDs. The full participation of civil society (particularly young people and people living with NCDs) from a diversity of communities is essential to make progress in 2018: without this pressure, the HLM may not receive the attention from governments that it deserves. NCDs cannot be siloed within health ministries, as they are a ‘whole-of-government, whole-of-society’ issue, NCDA is calling for attendance by heads of state and government, who can ‘elevate health and NCDs from the purely technical realm to the political level – which is where the challenges for implementation lie’.

NCDA also shared preliminary results of a recent consultation of its network to inform its campaign priorities for 2018. The consultation culminated in a draft Discussion Paper, with six priority outcomes, which delegates then broke into regional groupings to discuss and plan how best to translate the priorities into simple, time-bound, regionally and nationally appropriate messages in further detail.

All the regions broadly agreed with the priorities, and several additional suggestions emerged: forge better links with other movements (maternal and child health, climate change, sustainable development and human rights), put greater emphasis on equity and social justice, improve data collection (which will help to build a national case for action) and using local politicians and First Ladies to champion the NCD cause.

The Latin American delegates, who have worked closely together for years, suggested a slogan that could be a helpful focus for action: Yes to economic growth, but not at any price!

The session was particularly useful for highlighting opportunities to build pressure for action on NCDs even before the HLM – such as at meetings of the African Union, the Organization of American States, the Commonwealth and at the Conference on Tobacco Or Health. The discussion helped to begin to contextualise the priorities for different regions, and to make a better case for action.

The conference was inaugurated by His Royal Highness Sheikh Dr. Sultan Bin Muhammad Al Qasimi, Member of the Supreme Council and Ruler of Sharjah, United Arab Emirates, who highlighted numerous investments and strategies arising from and in Sharjah such as the opening of The Sharjah Lab at the Francis Crick Institute in London, and tackling obesity, tobacco and alcohol use and treating cancer.

His Highness then introduced a video showcasing the leadership of Patron of the Forum, Her Highness Sheikha Jawaher Bint Mohammed Al Qasimi, Wife of the Ruler of Sharjah (UAE), Founder and Royal Patron of Friends of Cancer Patients, and International Ambassador for Childhood Cancer for the Union for International Cancer Control, which demonstrating her inspiring commitment to the fight against cancer and NCDs.

Her Excellency Mrs Sawsan Jafar, Chairman of the Board of Directors of Friends of Cancer Patients, local partners of the Forum, went on to welcome delegates to the Forum which she noted as marking significant strides made in the time since the first Global NCD Alliance Forum in Sharjah in 2015, and recognises the achievements in advancing the Sharjah Declaration on NCDs, an outcome of the 2015 Forum.

We then heard from several leading lights in the NCD world, with Sir George Alleyne of PAHO chairing Plenary 1, and introducing, via video messages, former New York mayor and WHO Global Ambassador for NCDs Michael Bloomberg and WHO Director-General Dr Tedros.

Dr Sania Nishtar, recently appointed Co-chair of the WHO High-level Commission on NCDs, delivered the keynote address: ‘Never before has there been such a wide chasm between the knowledge of the burden of disease and what works, and action on the ground,’ she said. Dr Nishtar also looked to the future, and exciting transformative processes and opportunities in health mobile technology, artificial intelligence, the internet of medical things – that must spark new thinking, and competencies and regulatory requirements.

The expert panel that ended the Opening Plenary, comprising Dr Kibachio Joseph Mwangi, Ms Abish Romero, Princess Dina Mired and Dr Jacob Gayle, built on many of the key themes that had begun to emerge earlier in the day: childhood obesity as a ‘compelling entry point’ on NCDs; civil society’s key role – both to criticise but also to inspire; concern about industry interference and the need to choose suitable private-sector partners; the strong links between NCDs and poverty; and the active and continual involvement of young people and people living with NCDs. As Abish Romero, a member of the Global Advisory Committee of the Our Views, Our Voice initiative put it, “I refuse to leave decisions on the future of my life to strangers.”

“I refuse to leave decisions on the future of my life to strangers.” - Abish Romero - #NCDAF2017 #Sharjah