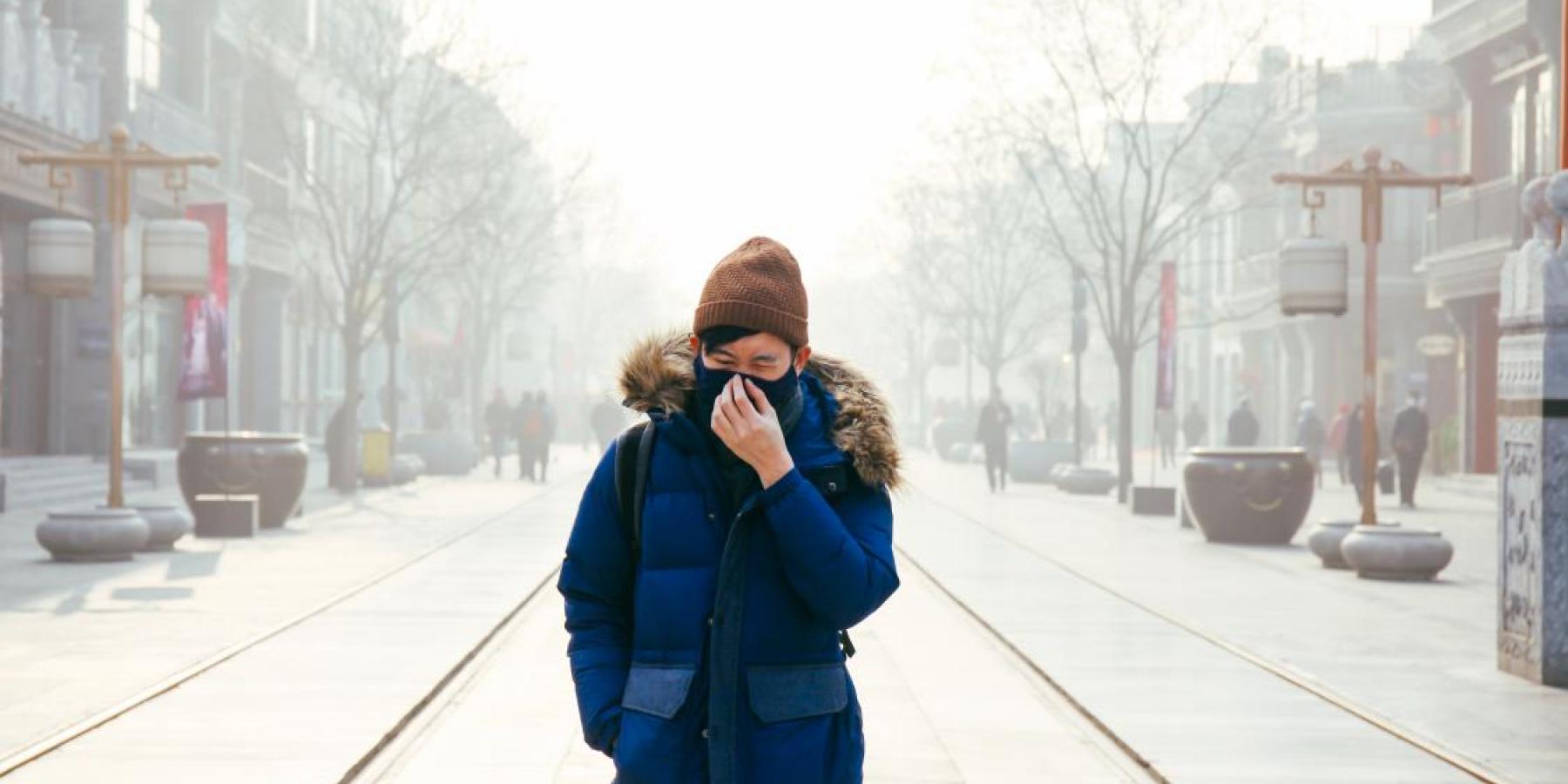 A man walks through Beijing, China surrounded by smog © Shutterstock

London and Beijing. Capital cities half a world away, but plagued by a common – and deadly – problem: air pollution. Globally, outdoor air pollution accounts for over 4 million deaths a year, and brings forward up to 9,000 deaths a year in London (there are no official city-level statistics for Beijing). Air pollution is the fourth-leading risk factor for disease in the world, contributing to a wide range of NCDs: cardiovascular disease (heart disease and stroke), chronic obstructive pulmonary disease (including emphysema and chronic bronchitis), asthma among children, cancer and dementia – affecting the daily quality of life of millions of people. So what are the two cities doing to tackle air pollution?

Air pollution isn’t new. In 1952, London’s Great Smog is thought to have killed 4,000 people in just a few days, and it contributed to a total of 12,000 deaths– hospitalisations increased by 50% and respiratory admissions by over 150%. The primary pollutant was sulphur dioxide, with families gathering around coal-burning fires each evening, and with coal-burning power stations by the river in the heart of the city. The smog acted as a tipping point for government action – the Clean Air Act 1956 established ‘smoke control areas’, with residents given generous subsidies to convert to smokeless fuels and power stations moved outside urban areas and switched to (cleaner) gas.

So why is air pollution still a problem for London? Part of the answer lies in a well-intentioned push over the last couple of decades to switch from petrol to diesel cars, which produce less carbon dioxide and are therefore less of a contributor to climate change – but they are also a source of nitrogen dioxide (NO2) and fine particulate matter (PM), known since the 1990s to be damaging to health. This is barely visible unless you get high above the city, when it shows as a fine brown haze – but there has been a dawning realisation over the last few years that this can no longer continue, with photos of young children standing in facemasks outside their schools making the front page of London’s Evening Standard.

Pollution problems in Beijing are more recent than in London – indeed, China put standards in place for ambient air quality in the 1980s, years before industry, transport and energy demands had reached the point at which air pollution became a threat to city dwellers’ health. From 2000 onwards, however, air pollution became a real problem, and the 2008 Olympics was a tipping point for awareness and action. Prior to this, air quality data had been kept confidential, but in 2008 the US Embassy began tweeting about pollution levels – finally leading the government to make data public and to acknowledge the problem.

Air pollution is the "biggest public health emergency of a generation" - Sadiq Khan, Mayor of the City of London

Emission compliance is now aggressively monitored and (as in the UK in the 1950s) industrial power plants have been moved outside the most affected cities, cleaner stoves are encouraged, and efforts are being made to convert from coal to cleaner natural gas. Diesel is less of a driver of pollution than in London – there are few diesel cars, and people have been incentivised to buy electric vehicles (getting a licence plate is difficult in Beijing, but until very recently there have been no such restrictions on EVs – and they are not subject to the rules restricting car use on high-pollution days). However, the very rapid growth of buying goods on the Internet, largely delivered by diesel trucks, may affect levels of diesel pollution.

Neither city is sitting idly by. In the UK, there has been a rapid recent rise in public pressure on local and national government to take action, particularly on NO2 – one road in London exceeded its annual limit on NO2 within the first five days of 2017. When the government tried to delay the publication of a national air quality plan, it was successfully taken to court by campaigning organisation Client Earth, who claimed that the delay was already unacceptable – and the judges agreed. This resulted in the Air Quality Plan for Nitrogen Dioxide which has been criticised for doing too little in the short-term, and for leaving action in the hands of local authorities. This month (September), a report to the Human Rights Council from the UN Special Rapporteur on the human rights implications of hazardous substances and toxic waste has reiterated that the government ‘continues to flout its duty to ensure adequate air quality and protect the rights to life and health of its citizens’ (para. 31). The mayor of London has been vocal in his concerns about pollution in London, introducing a £10 daily charge from October for the most polluting vehicles and establishing low emission bus zones.

In China, the Air Pollution Action Plan 2013–17 set goals for air pollution (including that concentration of PM10 – particulate matter less than one 100th of a mm – must fall by 10% or more in all cities) with specific targets for the most affected regions of the country, particularly the industrial east: in Beijing, average PM2.5 (particulate matter less than one 400th of a mm) levels were required to fall from 89.5μg/m3 in 2013 to 60μg/m3 (still far above the WHO guideline of 10μg/m3 as an annual mean). Chinese society is such that government edicts are rapidly rolled out and seen as being for the good of the greater number (in contrast, one imagines that suggesting cars with only odd- or even-numbered licence plates should be allowed on London’s streets would not go down well in the UK’s more individualist society!). Beijing may be on track to reach these goals, and further targets will soon be set – but the city still has a long way to go. There are days on which air pollution is so bad that schools are closed, and some families are moving to other areas with cleaner air – PM2.5 concentrations can peak at 1,000μg/m3.

While London may be ‘orders of magnitude ahead of Beijing’ in terms of what it has achieved, there is no room for complacency – and Professor Jim Zhang believes that:

‘while historically London offered much for Beijing to learn on how to use legislations and technologies to improve air quality, the huge success in bike sharing and in using electric vehicles and CNG bus fleets in Beijing may offer London some food for thought’.

Citizen engagement will keep the pressure on government to deliver on its promises. In Beijing, residents are very aware of the threat to health, on bad haze days many people wear face masks, and many households own an air purifier. In both countries, there are apps that provide alerts to warn residents when pollution is particularly high. In the UK, the first National Clean Air Day was held in 2017, with air pollution trending highly on social media, over 200 volunteer-led events, and hundreds of organisations encouraging employees, students, patients and residents to adopt clean air actions:

‘An opinion survey for National Clean Air Day showed that 85% of the public think it is important to tackle air pollution and 65% would be willing to pay a monthly contribution to fund air-quality measures. This level of commitment provides a clear mandate for national and local authorities to take ambitious steps to improve air quality swiftly with public backing.’

Citizen activism can help to build the evidence base through the use of monitoring kits (e.g. from Friends of the Earth) and health professionals are being encouraged to get involved through the Unmask my City campaign.

Finally, it is worth remembering that London and Beijing are just individual cities: the problems of air pollution go far beyond their perimeters. Plans such as the complete phasing of diesel cars and vans in the UK by 2040, and China’s consideration of halting production of all diesel and petrol cars need to be introduced and enforced nationally – and rapidly.

With thanks to Professor Jim Zhang (Duke University in the United States and Duke Kunshan University in China) and Chris Large (Global Action Plan – coordinators of National Clean Air Day).

Katy Cooper (@healthkaty) has worked on the prevention of NCDs since 2005 – until the end of 2016 as assistant director at C3 Collaborating for Health and now as an independent consultant and writer. She is particularly interested in the intersection of NCD prevention with environmental and human rights issues.