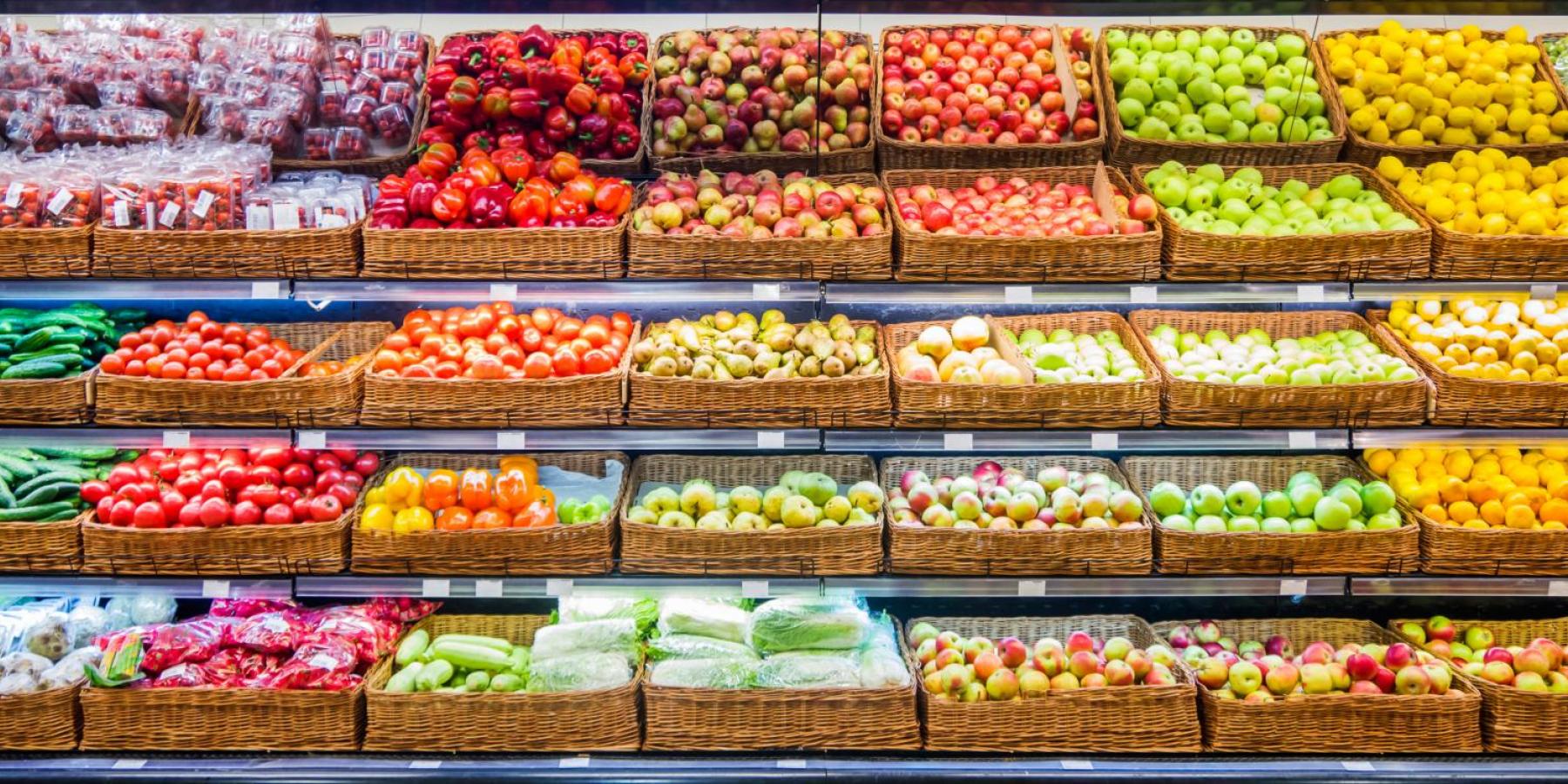 The Summer Academy in Global Food Law and Policy took place in Bilbao, Spain from Monday 17th to Thursday 20th July 2017. Subjects covered during the four-day workshop included the role of law in NCD prevention; unhealthy diet regulatory measures including front-of-pack labelling and fiscal measures; NCD regulation in the context of the right to health and practical examples of unhealthy diet regulation and litigation in Latin America; nudging principles applied to food regulation; practical implementation of business and human rights principles to food industry business operations; and data protection and food safety issues.

Anita George, Senior Legal Policy Advisor from the McCabe Centre for Law and Cancer, attended the Academy and presented on fiscal policies to reduce the consumption of energy-dense, low-nutritional value foods and the implications for international trade and investment law. Here she provides some thoughts on the potential intersection between food industry and public health interests.

An intersection between food industry and public health interests?

The Summer Academy in Global Food Law and Policy brought together approximately 30 participants from a diverse range of backgrounds including civil society, academia, policy makers and food industry representatives. With the inclusion of both industry and public health representatives at the workshop, one key question remained salient in my mind throughout the duration of the workshop – what is the intersection, if any, between food industry and public health interests?
Recognising that the ‘food industry’ encompasses a broad spectrum of food products, if we confine discussion to corporate actors involved in the promotion of high-energy, low-nutritional value food products, is there always an irreconcilable conflict between the interests of an industry that has a primary mandate of ensuring a profit with those of a community with the primary mandate of protecting public health? Or is there an intersection that enables the advancement of the interests of both actors without significantly compromising the interests of either, resulting in positive changes such as product reformulation and marketing of ‘healthier’ food products? Exploration of this intersection does not mean that industry and public health should ‘work together’ in terms of collaborating or entering into partnerships or policy-setting, but rather seeks to identify how shared objectives can be leveraged and further developed to advance the interests of both actors. 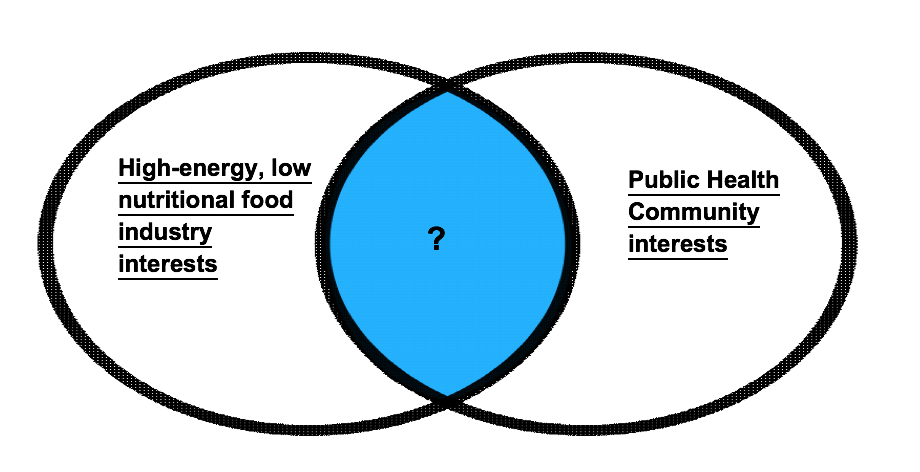 It is important to consider how to prevent industry from exploiting ‘socially responsible practices’ in circumstances where they are, in fact, tokenistic gestures sought to obtain reputational benefits through activities that have questionable public health benefits.

There is, without doubt, a clear need to exercise caution to protect against conflict of interests between public health and industry actors in the development of public health policies designed to regulate unhealthy diets by government and other norm-setting bodies including the World Health Organization (WHO). This is recognised, for example, in the context of Paragraph 45 of the Framework of Engagement with Non-State Actors (FENSA) which acknowledges the need for WHO to exercise particular caution when engaging with actors, including private sector entities, whose policies or activities negatively affect human health, including NCDs, and are not in line with WHO’s policies, norms and standards.
However, the question remains as to whether common interests between public health communities and food industry interests could be leveraged beyond the policy development setting to invoke a positive change in corporate behaviour.
One area where interests could intersect is in the context of practices that increase corporate reputation. The adoption by industry of ‘Corporate Social Responsibility’ (‘CSR’) practices, including those that protect and advance public health, also has undisputed benefits for corporate image. This intersection could potentially come to fruition in two specific contexts – the practical application of business and human rights principles to food industry practices, and nudging techniques. However, it is also important to consider how to prevent industry from exploiting these socially responsible practices in circumstances where they are, in fact, tokenistic gestures sought to obtain reputational benefits through activities that have questionable public health benefits.

With increasing momentum towards holding corporations responsible for human rights, could engagement between corporate and public health actors be capitalised to promote the advancement of the right to health?

Assessments such as the recently released Corporate Human Rights Benchmark (CHRB) results released in March 2017 [1] provide companies with valuable promotion and reputational incentives to implement operational practices that comply with principles such as those outlined in the Guiding Principles on Business and Human Rights, the ‘Ruggie Principles’, endorsed by the UN Human Rights Council in June 2011.

However, a review of tools such as the CHRB reveals a methodological focus on reviewing a company’s human rights compliance in upstream operations, for example, the level of protection of workers’ labour rights during manufacturing processes, rather than downstream behaviours, such as the effects of consumption of products by end-users. As one expert at the Academy highlighted during the course of discussions on corporate social responsibility and CHRB, there is a need for the concept of business and human rights, and associated indicators and assessments, to extend beyond operational processes to incorporate concepts such as the ultimate impact of the consumption of products on the right to health of its consumers.

Applying this to the food industry, the expansion of human rights and business assessment tools beyond focusing solely on production-based practices to incorporate a focus on consumption practices could potentially lead to changes in food industry strategies such as product reformulation and shifts in marketing to prioritise the production and promotion of ‘healthier’ products. This could provide a valuable opportunity for engagement by public health advocates as to how these forms of human-rights compliant practices could be effectively assessed and evaluated.

There must also be mechanisms in place to ensure that industry actors do not engage in tokenistic socially responsible practices and exploit the opportunity as a mere marketing/public relations tool. Public health actors must also play an important, and vocal, role in holding industry accountable for their purported human rights-compliant activities.

The area provides an interesting forum for public health actors to advocate for the greater inclusion of the protection and promotion of the right to health of consumers as an indicator of human rights-compliance by CSR-supporting food industry actors.

While definitions vary, broadly speaking nudge principles use behavioural science strategies to change choice architecture, i.e influencing choice by seeking to overcome barriers to individuals acting in accordance with declared self-interest. Behavioural scientists have advocated for the greater inclusion of nudging strategies by governments as a regulatory tool in the prevention of overweight and obesity to overcome the challenges of allegedly more ‘invasive’ traditional regulation, such as bans.[2]
The concept of nudging has been embraced by some companies, with the first AIM International Nudging for Good Awards launched in 2016 designed to reward businesses that seek to make it easy or desirable for consumers to change behaviour and adopt a ‘healthier and/or more sustainable one’.[3] One 2017 Nudging for Good award recipient was Savencia’s En Cas de Caprice, a nudge for ‘mindful pleasure’ which seeks to encourage ‘healthy’ eating habits by clearly delineating 15g portion sizes of cheese calculated on the basis of national nutrition programme recommendations of three dairy products per day. The calculation method for portion size does not appear to reference national programme recommendations for energy, fat or salt intake.[4]
While the reputational benefits for industry in implementing such nudge techniques is clear, important questions arise as to whether public health actors can or should play a role in ensuring that ‘nudges for good’ do indeed effectively protect public health. There are clear hurdles that need to be addressed.  It is important for public health actors to play a role in the determination of whether nudges are indeed providing public health benefits. However, they would need to ensure that such input is not viewed as an endorsement of the product. There are also questions that should be raised about the transparency of nudges. Focusing publicity and accolades on ‘good’ nudges may be skewed when nudging techniques are presumably also used by industry in a less transparent manner to encourage the consumption of unhealthy products.
It is also clear that the ideological framing of ‘nudging’ is fraught. Transparent laws and regulations enacted through consultative processes by democratically elected governments are classified as more ‘paternalistic,’ while potentially covert modifications to behavioural stimuli are classified as ‘libertarian’ alternatives.
Furthermore, nudging techniques appear to be predicated on the assumption that individuals are able to exercise freedom of choice. However, this assumption is not valid in all settings. For example, in low socio-economic settings, traditional regulation, such as subsidies, is often required to ensure that consumers can even obtain access to the healthy products, a necessary pre-cursor to ensure they are then able to exercise a free ‘healthier’ choice.

Caution must continue to be exercised with regard to the role of unhealthy food industry producers in development of public health policies and laws and in collaborations and/or partnerships between industry and public health actors due to potential conflicts of interest. However, there is an area where public health actors and industry actor interests may intersect and that is in the area of corporate reputation.

Anita George is Senior Legal Policy Advisor from the McCabe Centre for Law and Cancer (@McCabe_Centre). The McCabe Centre is a joint initiative of Cancer Council Victoria and the Union for International Cancer Control. Anita's work focuses on the interrelationship between NCD prevention, trade and investment law and global governance, with a focus on overweight and obesity prevention. She is also a member of the World Cancer Research Fund International’s Policy Advisory Group. Prior to joining the McCabe Centre, Anita practised as a human rights lawyer specialising in refugee law and mental health law, and was awarded a General Sir John Monash Foundation Scholarship to complete a Masters of Public Affairs (Summa Cum Laude) at Sciences Po Paris in 2014.

[2] See for example Behavioural Science and Policy Association. what is nudging? August 16, 2016. Available at: https://behavioralpolicy.org/what-is-nudging/. Accessed 14.08.2017